The Emma Hart Academy treats all cases of suspected malpractice* very seriously and will investigate all suspected and reported incidents of possible malpractice.

The purpose of this Policy and Procedure is to set out how allegations of malpractice in relation to all The Emma Hart Academy Assessment Centre and training events are dealt with.
The scope of the policy is to provide:

• a definition of malpractice
• examples of learner and centre malpractice and maladministration;
• possible sanctions that may be imposed in cases of malpractice.

*The term ‘malpractice’ in this policy is used for both malpractice and maladministration.

For the purpose of this document ‘malpractice’ is defined as:

Any act, or failure to act, that threatens or compromises the integrity of the assessment processor the validity of The Emma Hart Academy qualifications and training events and their certification. This includes: maladministration and the failure to maintain appropriate records or systems; the deliberate falsification
of records or documents for any reason connected to the award of qualifications and training events;
acts of plagiarism or other academic misconduct; and/or actions that compromise the reputation or authority of its employees or associates. The Emma Hart Academy will report all relevant cases of suspected malpractice to the relevant authority, accepting that in certain circumstances they may take action of its own, including imposing sanctions.

• Obtaining examination or assessment material without authorisation.
• Arranging for an individual other than the learner to sit an assessment or to submit an assignment not undertaken by the learner.
• Impersonating another learner to sit an assessment or to submit an assignment on their behalf.
• Collaborating with another learner or individual, by any means, to complete a coursework assignment or assessment, unless it has been clearly stated that such collaboration is permitted.
• Damaging another learner’s work.
• Inclusion of inappropriate or offensive material in coursework assignments or assessment scripts.
• Failure to comply with published examination regulations.
• Disruptive behaviour or unacceptable conduct, including the use of offensive language, at centre or assessment venue (including aggressive or offensive language or behaviour).
• Producing, using or allowing the use of forged or falsified documentation, including but not limited to:
o personal identification;
o supporting evidence provided for reasonable adjustment or special consideration applications; and
o competency documents
o results documentation, including certificates.
• Falsely obtaining, by any means, a
• Misrepresentation or plagiarism The Emma Hart Academy certificate.
• Fraudulent claims for special consideration while studying.

Malpractice by The Emma Hart Academy employees and associates

Examples of malpractice by, employees, tutors and assessors are listed below. These examples are not exhaustive and all incidents of suspected malpractice, whether or not described below, will be fully investigated, where there are sufficient grounds to do so.

• Failure to adhere to the relevant regulations and procedures, including those relating to (The Emma Hart Academy) approval, security undertaking and monitoring requirements as set out by these regulations.
• Knowingly allowing an individual to impersonate a learner.
• Allowing a learner to copy another learner’s assignment work, or allowing a learner to let their own work be copied.
• Allowing learners to work collaboratively during an assignment assessment, unless specified in the assignment brief.
• Completing an assessed assignment for a learner or providing them with assistance beyond that ‘normally’ expected.
• Damaging a learner’s work.
• Disruptive behaviour or unacceptable conduct, including the use of offensive language (including aggressive or offensive language or behaviour).
• Allowing disruptive behaviour or unacceptable conduct at The Emma Hart Academy to gounchallenged, for example, aggressive or offensive language or behaviour.
• Divulging any information relating to learner performance and / or results to anyone other than the learner.
• Producing, using or allowing the use of forged or falsified documentation, including but not limited to:
o personal identification;
o supporting evidence provided for reasonable adjustment or special consideration applications; and
o competency documents
o results documentation, including certificates
• Falsely obtaining by any means a certificate.
• Failing to report a suspected case of learner malpractice, including plagiarism, to your Line Manager.
Possible malpractice sanctions

Following an investigation, if a case of malpractice is upheld, The Emma Hart Academy may impose
sanctions or other penalties on the individual(s) concerned. Where relevant we will report the matter, and may impose one or more sanctions upon the individual(s) concerned. Any sanctions imposed will reflect the seriousness of the malpractice that has occurred.

Listed below are examples of sanctions that may be applied to a learner, tutor or other associates who has had a case of malpractice upheld against them. Please note that this list is not exhaustive and other sanctions may be applied on a case-by-case basis.

Possible sanctions that may be applied to learners
• A written warning about future conduct.
• Notification to an employer, regulator or the police.
• Removal from the course.

Possible sanctions that may be applied to employees, tutors and other associates
• A written warning about future conduct.
• Imposition of special conditions for the future involvement of the individual(s) in the conduct, teaching, supervision or administration of learners and/or examinations.
• Informing any other organisation known to employ the individual in relation to courses or examinations of the outcome of the case. The Emma Hart Academy may carry out unannounced monitoring of the working practices of the individual(s) concerned.
• Dismissal.

Reporting a suspected case of malpractice

This process applies to, employees, tutors, learners and other associates to The Emma Hart Academy
and to any reporting of malpractice by a third party or individual who wishes to remain anonymous.

Any case of suspected malpractice must be reported as soon as possible and at the latest within two working days from its discovery to the Centre Manager (Quality Nominee).

A written report should then be sent to the Centre Manager, clearly identifying the factual information, including statements from other individuals involved and / or affected, any evidence obtained, and the actions that have been taken in relation to the incident.

Wherever possible, and provided other learners are not disrupted by doing so, a learner suspected of malpractice should be warned immediately that their actions may
constitute malpractice, and that a report will be made to The Emma Hart Academy.
In cases of suspected malpractice by The Emma Hart Academy employees, tutors and other
associates, and any reporting of malpractice by a third party or individual who wishes to remain anonymous, the report made to the Centre Manager should include as much information as possible, including the following:
• the date time and place the alleged malpractice took place, if known.
• the name of the employee, tutor or other third party involved
• a description of the suspected malpractice; and
• any available supporting evidence.

In cases of suspected malpractice reported by a third party, or an individual who wishes to
remain anonymous, The Emma Hart Academy will take all reasonable steps to authenticate the
reported information and to investigate the alleged malpractice.

The individual(s) concerned will be informed of the following:
• that an investigation is going to take place, and the grounds for that investigation;
• details of all the relevant timescales, and dates, where known;
• that they have a right to respond by providing a personal written response relating to the suspected malpractice (within 14 working days of the date of that letter);
• that, if malpractice is considered proven, sanctions may be imposed by reflecting the seriousness of the case;
• that, if they are found guilty, they have the right to appeal.
• that The Emma Hart Academy has a duty to inform the relevant authorities / regulators, but only
after time for the appeal has passed or the appeal process has been completed. This may also include informing the police if the law has been broken and to comply with any other appropriate legislation.

Where more than one individual is contacted regarding a case of suspected malpractice, for example in a case involving suspected collusion, we will contact each individual separately, and will not reveal personal data to any third party unless necessary for the purpose of the investigation.

The individual has a right to appeal against a malpractice outcome if they believe that the policy or procedure has not been followed properly or has been implemented to their detriment.

Records of all malpractice cases and their outcomes are maintained by The Emma Hart Academy for
a period of at least five years, and are subject to regular monitoring and review. 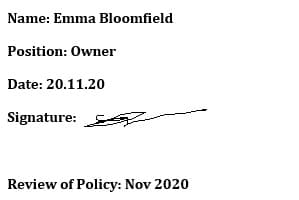